In physics, there is no place for subjectivity. Protons, electrons and neutrons have no feelings, they are acted upon by unsentimental forces which obey impartial physical laws. In my search for the objective truth I had kept my feelings at bay.

We are emotional beings. We feel happy, sad, angry, disgusted, fearful, etc. Emotions are our constant companion. We experience a range of emotions every day. Yet, we have difficulty handling our emotions, especially our negative emotions. Our emotional states not only affect us but affect those around us and affect how we experience life.

Society at large has had an evolving view of how one is expected to handle one’s emotions in public. At an earlier time, one was expected to be a stoic and hide one’s emotions, then in the sixties, one was encouraged to “let it all hang out”, more recently there is the notion of a middle ground referred to as emotional intelligence.

Emotions are what makes us human. It is no longer “cogito ergo sum” but rather “I feel therefore I am”. Various studies have shown that emotions activate our cardiovascular, skeletomuscular, endocrine, and autonomic nervous systems. We feel emotions as a wave of energy coursing through our body. Sometimes these emotions are so strong that we are swept up by this wave and lose control of ourselves, behaving in ways that we later regret. Our emotions are signals telling us to stop and look within ourselves, to inquire into the root causes of our emotion. “…. the longest journey you will make in your life is from your head to your heart.”  writes Gary Zukav, in his bestseller “The Heart of the Soul: Emotional Awareness”.[1]

From Gary Zukav’s book I learnt that our emotions are only the tip of the iceberg, there is a lot going on in our psyche that is beneath the surface. At the root of every emotion is either fear or love, according to Gary Zukav. Our negative emotions are rooted in fear. Unless we dig deep into our psyche and discover the origins of this fear, our negative emotions will not leave us alone. They are likely to be triggered over and over again, by different events each time. For example, if anger is our issue, it might get triggered by a driver cutting us off, or a rude checkout clerk, or a colleague at work. The anger remains the same but the trigger each time is different. In order to get rid of anger we have to dig deep to discover the root cause of our anger. 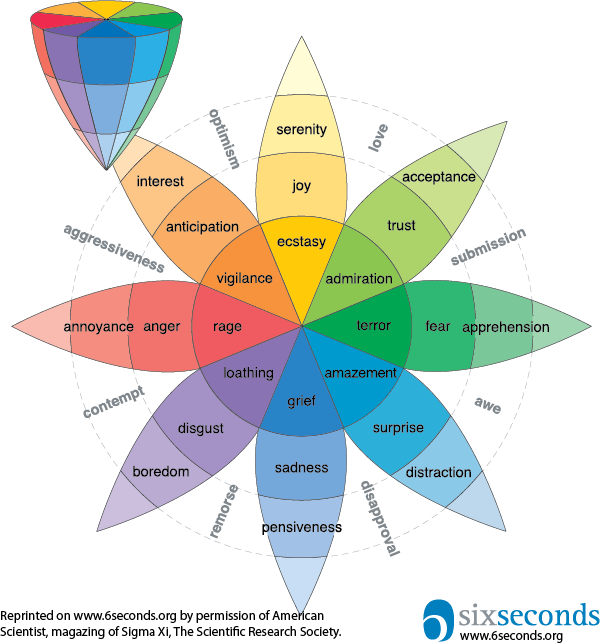 Primary: The eight sectors are designed to indicate that there are eight primary emotion dimensions. They are anger, anticipation, joy, trust, fear, surprise, sadness and disgust.

Intensity:  The cone’s vertical dimension represents intensity – emotions intensify as they move from the outside to the center of the wheel. For example, a feeling of boredom can intensify to loathing if left unchecked. This is an important rule about emotions to be aware of in relationships: If left unchecked, emotions can intensify. Herein lies the wisdom of enhancing your emotional vocabulary: it’s the bedrock of effectively navigating emotions.

The emotions with no color represent an emotion that is a mix of the 2 primary emotions. For example, anticipation and joy combine to be optimism. Joy and trust combine to be love. Emotions are often complex and being able to recognize when a feeling is actually a combination of two or more distinct feelings is a helpful skill. That is a basic guide for interpreting the emotion wheel created by psychologist Robert Plutchik.

Emotions are felt in the body as sensations. Expressions such as, “cold feet, sweaty palms, goosebumps, shivers down my spine, butterflies in my stomach, weak in the knees, hot headed, cold hearted…” are commonly used to sum up emotional states. Recently, researchers from Finland created colorful images that map how the engagement of specific body areas corresponds to 14 different emotions.

The new cross-cultural study titled, “Bodily Maps of Emotions” was published December 31, 2013 in the journal Proceedings of the National Academy of Sciences. This study from Aalto University in Finland, isolated a broad spectrum of emotions and created colorful body maps that correspond to 14 different emotions. The researchers found that the most common emotions trigger strong bodily sensations, and the bodily maps of these sensations were cross-cultural. 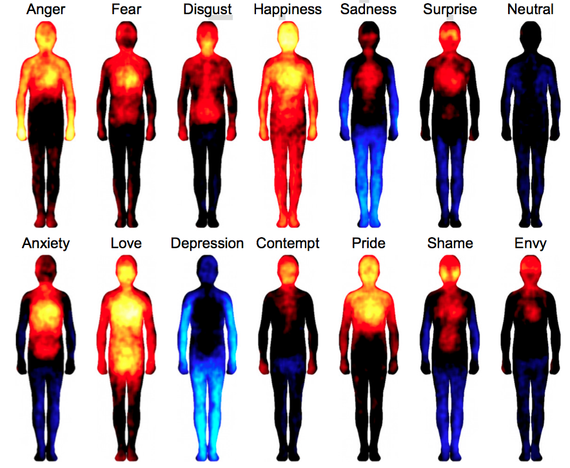 The engagement and disengagement patterns of the emotional body maps were consistent across different West European and East Asian cultures. This suggests that emotions and their corresponding bodily sensation patterns have a universal biological topography.

“Emotions adjust not only our mental, but also our bodily states. This way they prepare us to react swiftly to the dangers, but also to the opportunities such as pleasurable social interactions present in the environment. Awareness of the corresponding bodily changes may subsequently trigger the conscious emotional sensations, such as the feeling of happiness,” said assistant professor Lauri Nummenmaa from Aalto University.

Paul Ekman’s Atlas of Emotions[iii] is a tool that I discovered on the topic of emotions. The Atlas of Emotions is a powerful interactive tool for learning to identify one’s emotions and gain an understanding of one’s emotional world. Emotions guide our perceptions of the world, our memories of the past and even our moral judgments of right and wrong, most typically, in ways that enable effective responses to the current situation. According to Ekman “Anger contains both annoyance and fury”. The intensity of these states varies: We can feel mild or strong annoyance, but we can only feel intense fury.

In the interactive Atlas of Emotions, each emotion– Anger, Fear, Disgust, Sadness, Enjoyment– is mapped in terms of intensity of feelings associated with it and its duration. Annoyance is least intense and of short duration, exasperation is more intense and lasts long, whereas vengefulness is very intense and peaks quickly. Shown below is the “atlas” of FEAR…from trepidation to terror. 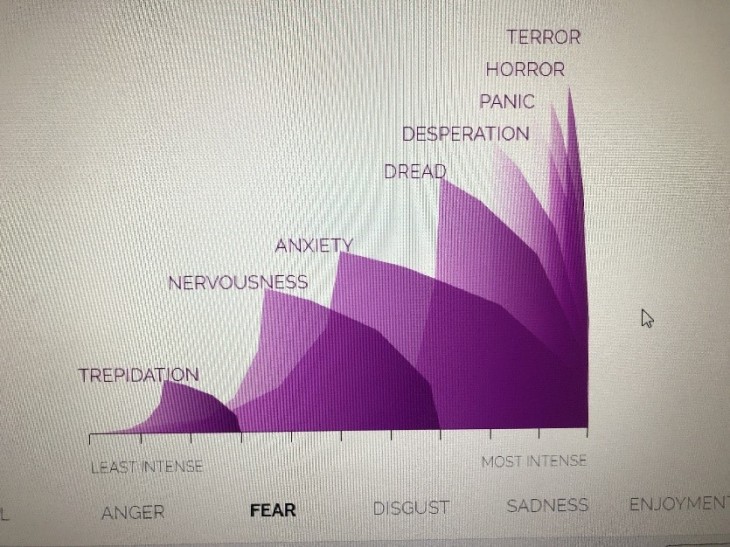 The corresponding body map of FEAR and LOVE, from the Alto University study, show where fear and love are felt most intensely in the body. 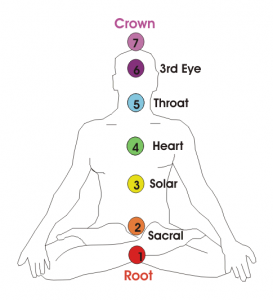 The baser emotions are said to correspond to the lower chakras, as one moves up the energy centers the associated emotions are nobler in character. Negative emotions are said to be the result of blockages in the chakras which inhibit the flow of energy through the body.  The psychic energy in the body is likened to a coiled cobra, and when the chakras are open the energy flows uninhibited, the cobra is uncoiled. This is the kundalini awakening in Hinduism.[vi]

At the opposite end of esoteric beliefs is the work being done at MIT’s Computer Science and Artificial Intelligence Lab (CSAIL) on emotion detection system using Wi-Fi. CSAIL has built a system called EQ-Radio that can identify emotions using radio signals from a wireless router whether or not a person is speaking or showing their emotions with facial expressions.[vii]

Emotions are barometers of our mental state. Negative emotions draw our attention to areas in us that need to be healed. The energies trapped in our emotions are looking to be released. We can release these energies consciously or they will release themselves often causing drama in our lives. Emotions that are held back and not releases leave am emotional scar in us.

My deep dive into my emotions has been both exhilarating and unnerving. My “journey from head to heart” has been emotional (pun intended). I have learnt a lot about myself and have shed some emotional baggage. I have acquired tools for understanding what makes me be “me”. I can meditate, watch my thoughts and emotions, and I can tune into my bodily sensations. These practices have helped me release energy blockages, allowing life to flow through with less resistance. What we resist persists.

Negative emotions are messengers directing us to areas in our being that need healing. They are trapped energies seeking release.